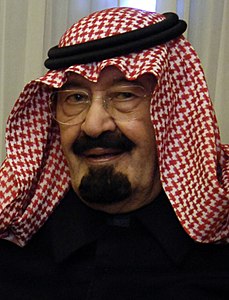 Who is Abdullah of Saudi Arabia?

Abdullah bin Abdulaziz Al Saud is the King of Saudi Arabia. He ascended to the throne on 1 August 2005 upon the death of his half-brother, King Fahd.

Abdullah, like Fahd, was one of the many sons of Ibn Saud, the founder of modern Saudi Arabia. Abdullah has held important political posts throughout most of his adult life. In 1961 he became mayor of Mecca, his first public office. And, in 1962, he was appointed commander of the Saudi Arabian National Guard, a post he was still holding when he became king. He also served as deputy defense minister and was named crown prince when Fahd took the throne in 1982. After King Fahd suffered a serious stroke in 1995, Abdullah became the de facto ruler of Saudi Arabia until claiming the throne a decade later.

Abdullah is the sixth king of oil-rich Saudi Arabia, thus controlling 18% of the world's oil. As of 2013 the kingdom boasts a GDP of over $900 billion making it among the 20 richest countries worldwide. The kingdom has been categorized as a high-income economy along with high human development. Abdullah has during his regime maintained close relations with United States and Britain and bought billions of dollars worth of defense equipment from both states. Abdullah has also pushed toward more rights for women in the kingdom by giving them the right to vote and to compete in the Olympics. Furthermore, Abdullah successfully maintained the status quo during the waves of protest in the kingdom during the Arab Spring. In November 2013, a BBC report claimed that Saudi Arabia could obtain nuclear weapons at will from Pakistan due to a long-standing relationship.

Discuss this Abdullah of Saudi Arabia biography with the community: