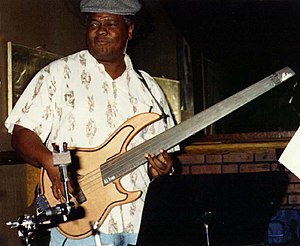 Who is Abraham LaBoriel?

Abraham Laboriel, Sr. is a Mexican bassist who has played on over 4,000 recordings and soundtracks. Guitar Player Magazine described him as "the most widely used session bassist of our time". Laboriel is the father of drummer Abe Laboriel Jr. and of producer, songwriter, and film composer Mateo Laboriel.

Laboriel was born in Mexico City. Originally a classically trained guitarist, he switched to bass guitar while studying at the Berklee School of Music. Henry Mancini encouraged Laboriel to move to Los Angeles, California and pursue a recording career.

Laboriel has worked with artists of countless music genres including the following:

Discuss this Abraham LaBoriel biography with the community: