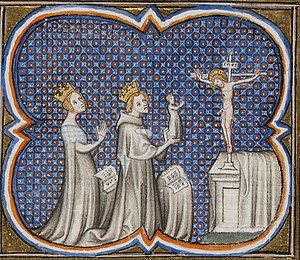 Who was Adèle of Champagne?

Adèle of Champagne, also known as Adelaide and Alix, was the third wife of Louis VII of France and the mother of his only male heir, who became Philip II. She was the daughter of Theobald II, Count of Champagne and Matilda of Carinthia and was named after her grandmother.

She was active in the political life of the kingdom, along with her brothers Henry I, Theobald V, and Guillaume aux Blanches Mains. Henry and Theobald were married to daughters of Louis VII and Eleanor of Aquitaine. Adèle and her brothers felt their position threatened when the heiress of Artois, Isabella of Hainault, married Adèle's son Philip. Adèle formed an alliance with Hugh III, Duke of Burgundy and Count Philip of Flanders, and even tried to interest Frederick Barbarossa. War broke out in 1181, and relations became so bad that Philip attempted to divorce Isabella in 1184.

Although her power decreased after the accession of Philip in 1180, she acted as regent of the kingdom in 1190 while Philip was away on the Third Crusade. She returned to the shadows when he returned in 1192 but participated in the founding of many abbeys.

Discuss this Adèle of Champagne biography with the community: