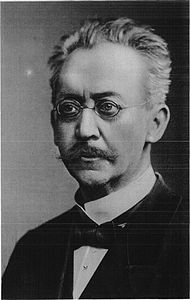 Who was Adolf von Harnack?

Carl Gustav Adolf von Harnack was a German Lutheran theologian and prominent church historian. He produced many religious publications from 1873 to 1912.

Harnack traced the influence of Hellenistic philosophy on early Christian writing and called on Christians to question the authenticity of doctrines that arose in the early Christian church. He rejected the historicity of the gospel of John in favor of the synoptic gospels, criticized the Apostles' Creed, and promoted the Social Gospel.

In the 19th century, higher criticism flourished in Germany, establishing the historical-critical method as an academic standard for interpreting the Bible and understanding the historical Jesus. Harnack's work is part of a reaction to Tübingen, and represents a reappraisal of tradition.

Besides his theological activities, Harnack was a distinguished organizer of sciences. He played an important role in the foundation of the Kaiser Wilhelm Gesellschaft and became its first president.

Discuss this Adolf von Harnack biography with the community: