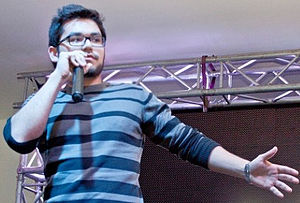 Who is Alejandro Hernández?

Alejandro Manrique Hernández Reinoso is a Venezuelan filmmaker. He achieved viral success on YouTube thanks to The Alejandro Hernández Show, an online comedy show that describes the everyday life of Venezuela's citizens. Most of the content is in Spanish, although some sketches are recorded in English. Since 2009, his videos have reached a total of over 7 million views, only those of his YouTube account. On 2011 Hernández signed a contract with PlanetaUrbe.Tv. Since then all of his episodes were uploaded to PlanetaUrbe's website instead of YouTube. After the contract ended, he returned to YouTube through elmostacho.com website. Hernández is currently at number 148 on the most followed Twitter users in Venezuela, and is the most followed user in the state of Zulia. He won the Celebrity award at the 2011 Twitter Awards held by El Nacional.

Discuss this Alejandro Hernández biography with the community: