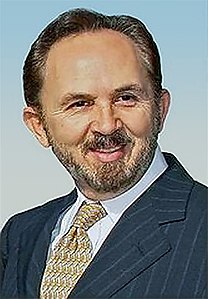 Alejandro Junco de la Vega was born August 28, 1948 in Monterrey, Nuevo León, Mexico. He is a distinguished Mexican journalist. He earned his Bachelor’s Degree in Journalism from the University of Texas at Austin in 1969.

He worked in the newsroom and occupied different management positions at the “EL NORTE” newspaper in Monterrey and, in 1970, teaming with U.S. journalism professors, created Mexico’s first school of journalism to battle the flaws that plagued the profession. El Norte’s journalism courses successfully raised the journalistic standards in the newsroom to a new level and were the cornerstones for the growth of what has become Grupo Reforma.

He became publisher of El Norte in 1973, and under his leadership the paper has garnered a number of major awards for Journalistic Merit, both at the national and international level.

In November, 1993, he launched the REFORMA newspaper in Mexico City, which today ranks number one among readers in the nation’s capital.

On November 20, 1998, he unveiled MURAL in Guadalajara, Jalisco, which has also become the leader in that city.

Under his leadership, the Metro dailies were also founded.