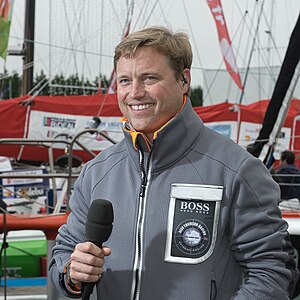 Who is Alex Thomson?

British skipper Alex Thomson is a professional offshore yacht racer. Competing in the IMOCA 60 class, Alex has been sponsored by Hugo Boss since 2003, making their relationship one of the longest in professional sailing.

Thomson was born 18 April 1974 in Bangor, North Wales. He has a twin sister Sarah, and younger brother David. In 1999, Thomson became the youngest skipper to win a round-the-world race, when he won the Clipper Round the World Race, a record he still holds. He forged a long lasting bond with crew member Sir Keith Mills, who later became co-founder of Alex Thomson Racing.

The following year Alex won the Round Britain and Ireland race and launched onto the solo racing scene, making his mark by smashing the single handed world 24-hour monohull distance record in 2003 and again in 2007, which record he held until it was surpassed multiple times in the 2012–2013 Vendee Globe race.

He took part in the 2007 Barcelona World Race, securing a 2nd place podium finish and setting a second monohull world distance record. Thomson then sought to become the first Briton to win what many consider the world’s toughest sailing challenge; the solo 26,000 mile non-stop Vendée Globe.

Discuss this Alex Thomson biography with the community: