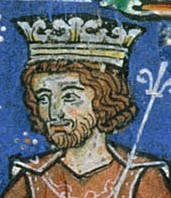 Amalric I of Jerusalem

Who was Amalric I of Jerusalem?

Amalric of Jerusalem was King of Jerusalem 1163–1174, and Count of Jaffa and Ascalon before his accession. Amalric was the second son of Melisende of Jerusalem and Fulk of Jerusalem, and succeeded his older brother Baldwin III. During his reign, Jerusalem became more closely allied with the Byzantine Empire, and the two states launched an unsuccessful invasion of Egypt. Meanwhile, the Muslim territories surrounding Jerusalem began to be united under Nur ad-Din and later Saladin. He was the father of three future rulers of Jerusalem, Sibylla, Baldwin IV, and Isabella I.

Discuss this Amalric I of Jerusalem biography with the community: