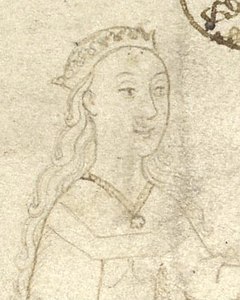 Who was Anne de Beauchamp, 15th Countess of Warwick?

Her maternal grandfather was the brother of Cecily Neville, Duchess of York, wife of Richard Plantagenet, 3rd Duke of York. Her mother was a first cousin of Edward IV of England, Edmund, Earl of Rutland, Margaret of York, George Plantagenet, 1st Duke of Clarence and Richard III of England.

In 1445, her father died. While his dukedom became extinct, his earldom was inherited by his daughter, so Anne became the suo jure 15th Countess of Warwick at age two. Anne also succeeded to the title of 7th Baroness Burghersh [E., 1330] on 11 June 1446, suo jure. However, she died just three years later at Ewelme in Oxfordshire, the home of her maternal step-great-grandmother. She was buried in Reading Abbey.

Her title as Countess of Warwick was inherited by her paternal aunt, Lady Anne, and maternal uncle, Sir Richard.

Discuss this Anne de Beauchamp, 15th Countess of Warwick biography with the community: