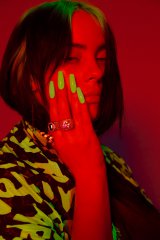 Who is Billie Eilish?

Billie Eilish is an American singer and songwriter. She is best known for her successful debut single, ‘Ocean Eyes.’ She was born and raised in Los Angeles, California. Belonging to a family of musicians, she was destined to make a career in performing arts. She joined a choir at the age of 8, and by the time she turned 11, she had begun writing and singing her own songs. Her elder brother, Finneas O’Connell, was the biggest influence in her life while she was grew up. He had his own band and had written a song titled ‘Ocean Eyes.’ Billie performed the song and released it online. It became a massive success. This turned out to be her first massive breakthrough. In 2017, her brother helped her record the single ‘Bellyache.’ With the success of the song, Billie released her debut EP, ‘Don’t Smile at Me,’ in August 2017. The EP appeared on several American and international music charts. In October 2017, ‘Apple’ named her their newest ‘Up Next’ artist. Billie Eilish was born Billie Eilish Pirate Baird O’Connell, on December 18, 2001, in Los Angeles, California. She was born into a family of musicians and actors. She grew up with her elder brother. Her parents, Maggie Baird and Patrick O’Connell, were popular figures in the American entertainment industry.

While growing up, she saw her elder brother, Finneas O’Connell, fall in love with music. Additionally, her mother wrote songs and her father played instruments such as the piano and the ukulele. The musical vibe in the house inspired little Billie to make a career in music.

She grew up listening to the music of ‘The Beatles’ and Avril Lavigne. Her father loved making mixtapes of various artists.

She was homeschooled for most of her early years, but that did not stop her from participating in extracurricular activities. She loved acting in homemade films and also sang and danced whenever she found the chance.

When she turned 8 years old, she joined a choir and sang with them for three years. By the time she was 11 years old, she was already writing and composing songs of her own. She also made several short films. She shot them on a camera and edited them on ‘iMovie,’ ‘Apple’s video-editing app.

Other than acting and music, dance was another passion of hers. She took dance classes in her early teenage years. With a plethora of skills, she aimed at making a big career in the show business.

Her elder brother had a band of his own. He had written a song named ‘Ocean Eyes’ and asked his sister to record it in her voice. This accidental song turned out to be the breakthrough success for Billie and boosted her career.The song ‘Ocean Eyes’ was recorded in October 2015. It was initially meant for Billie’s dance classes. She handed over the song to her dance teacher and meant it to be featured in her next dance routine. The song turned out to be good, and the siblings decided that it must be up on the music-sharing platform ‘SoundCloud.’

The song was uploaded on ‘SoundCloud’ in early 2016, and by March, the music video was released. The song shot up and registered more than 10 million hits within a short period of time. This success was unexpected and made way for many more versions. In November 2016, a music video with Billie dancing on the song was released. It turned out to be another success.

Several major record labels came ahead to buy the rights for the song. The song was released worldwide by ‘Darkroom’ and’ Interscope Records.’ It immediately became a critical and commercial success. Toward the end of the year, Billie released another single, ‘Six Feet Under.’

Inspired by the success of her debut single, ‘Ocean Eyes,’ Billie recorded four remixes of the song and compiled them all in an EP titled ‘Ocean Eyes.’ All the remixes became big hits and gave Billie enough courage to carry on with her future projects.

In February 2017, Billie released the single, ‘Bellyache,’ which was produced and co-written by her brother. The music video for the song, directed by Miles and AJ, was released in March 2017.

Billie then recorded a song titled ‘Bored,’ which was included in the official soundtrack of the famous ‘Netflix’ series ’13 Reasons Why.’ Two more singles, ‘Watch’ and ‘Copycat,’ were subsequently released. In July 2017, Billie announced her highly awaited debut EP, ‘Don’t Smile at Me.’

The same year, she collaborated with Vince Staples and released a remix of her song ‘Watch,’ which was renamed ‘&Burn.’ In order to promote herself more, she embarked on a tour in January 2018. The tour ended in August 2018.

She also collaborated with famous American singer Khalid and worked with him on a single titled ‘Lovely,’ which was released in mid-2018. The song became immensely popular and made the producers of ‘13 Reasons Why’ buy its rights and feature it in the second season of the series.

In 2018, she released the singles ‘Bitches Broken Hearts,’ and ‘You Should See me in a Crown.’ There have been speculations about her debut album, which is supposed to be released sometime in 2018. Her brother has also confirmed the release of her debut studio album in the current year.

Billie Eilish has been criticized for never smiling in photographs. She has responded to such criticism by saying that she does not like smiling because it makes her feel weak and powerless.

She is known for her eccentric dress sense. She is often criticized for it but does not pay attention to the criticism.

Discuss this Billie Eilish biography with the community: