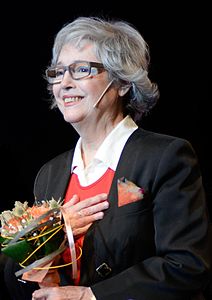 Prof. Mgr. Art. Božidara Turzonovová is a Slovak film and stage actress of Bulgarian origins, often referred to as The First Lady of Slovak Theater and Film, respectively.

The former chairman of the Art Film Fest in Trenčianske Teplice, nowadays the president of the International Film Festival Cinematik held in Piešťany, Turzonovová is also known as the first dean of the Faculty of Drama at the Academy of Performing Arts in Banská Bystrica, co-established by herself. Since 2009, she occupies the Managing Board of the Academy of Performing Arts in Bratislava and, simultaneously, lectures at the Faculty of Mass Media Communication at the University of Saints Cyril and Methodius in Trnava.

In terms of artistic achievements, the actress is most notable for her portrayal of Emmy Destinn in a Jiří Krejčík's motion picture entitled Divine Emma. The movie was submitted for the 54th Academy Awards in 1982 in the category Best Foreign Language Film. Most currently, the actress was cast in the Palm Springs International ShortFest-winning film The Lunch Box, which also scored a bronze medal in the narrative category at the 37th Annual Student Academy Awards competition, in 2010.