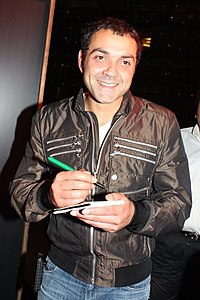 Who is Bobby Deol?

Bobby Deol is an Indian actor. Deol is the son of Bollywood actor Dharmendra and the brother of Sunny Deol, also a successful actor in the Mumbai based Indian film industry.

Deol has mostly acted in thriller films, often playing antiheroic characters who are forced to commit crime to avenge the deaths of loved ones. Examples of such films include Badal, Gupt, Jurm and Bichhoo. His films commonly involve themes of jealousy, deceit and revenge and his more romantic thrillers often involve him caught in love triangles. Some of his successful films are Barsaat, Gupt, Soldier, Badal, Ajnabee, Humraaz, Apne, Dostana, Yamla Pagla Deewana.

Discuss this Bobby Deol biography with the community: