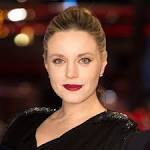 Who is Carolina Bang?

Carolina Herrera Bang, professionally known as Carolina Bang, is a Spanish actress. She is the best known to wider audience for her role in 2010 film A Sad Trumpet Ballad by Álex de la Iglesia, for which she earned a Goya Award for Best New Actress nomination.

Discuss this Carolina Bang biography with the community: