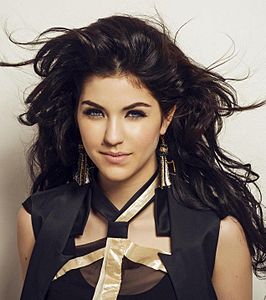 Who is Celeste Buckingham?

Celeste Rizvana Buckingham is a Czechoslovakian

Issued to favorable reviews on EMI Czech Republic, the set experienced a moderate success commercially, peaking at number thirty-seven on the Top 50 Prodejní. Unlike its lead single, "Run Run Run", which climbed up the national charts in both fellow territories to number two, overall being ranked as the most played song for any Slovak performer in the respective year, or rather second in the Czech neighborhood. Besides, the composition earned a number of nominations. Most notably at the 19th MTV Europe Music Awards, making then Buckingham the only female nominee within her own category, while four nominations in total at the local Slávik Awards. Some of those however acknowledged her general achievements in the music industry, such as the category New Artist of the Year, her winning at the ceremony.

Her subsequent outputs garnered attention within their format. Among them were a track recorded for AMO group, "Swing", and a solo single called "Never Be You". Her most recent release, namely "I Was Wrong", serves as her second duet with Spirit. In addition to performing arts, Buckingham is also an occasional host and model, and is a co-author of children's literature with one published work. The Lost Princess, written with her sister Carmel, issued Divis-Slovakia. On stage, one of the singer's most characteristic features represent her barefoot performances, influenced by Joss Stone.

Discuss this Celeste Buckingham biography with the community: