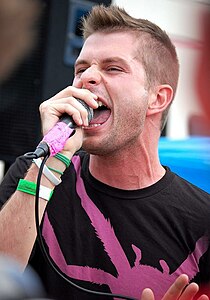 Who is Chad Ackerman?

Chad Ackerman is a rock singer-songwriter, musician, vegan, writer, director, actor, producer, illustrator, and artist. Ackerman's debut as a singer/songwriter was on November 30, 2012 under the name A Veil with the album entitled The In Between. Chad is also the vocalist for the bands Chapter 14, and Count Your Curses. He is the voice parody of Arnold Schwarzenegger for the band Austrian Death Machine. Chad was previously the vocalist for the band Destroy The Runner, guitarist for As I Lay Dying, and guitarist for Die Trying.

Discuss this Chad Ackerman biography with the community: