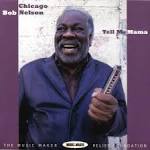 Who was Chicago Bob Nelson?

"Chicago" Bob Nelson was a harmonica player and singer who is known for amalgamating Louisiana and Chicago blues styles. He was singular in being mentored by traditional rural southern blues harmonica practitioners and melding their approach with urban Chicago playing, thus creating his own distinctive sound. Nelson died on January 18, 2013.

Discuss this Chicago Bob Nelson biography with the community: