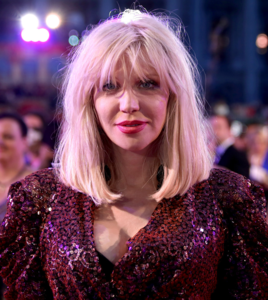 Who is Courtney Love?

Courtney Michelle Love is an American singer-songwriter, musician, actress, and artist. As frontwoman of alternative rock band Hole, Love's uninhibited stage presence and confrontational lyrics, combined with publicity attached to her 1992 marriage to Kurt Cobain and battles with drug addiction, made her a noticeable and controversial figure in the alternative music scene of the 1990s. Love received considerable critical acclaim and commercial success for her work as vocalist, lyricist, and guitarist of Hole, as well as critical recognition as an actress; her leading role in Miloš Forman's 1996 film The People vs. Larry Flynt earned her a Golden Globe Nomination for Best Actress.

Love was born to psychotherapist Linda Carroll, and writer and ex-Grateful Dead manager Hank Harrison; she was mainly brought up in Oregon by her mother after her parents divorced in 1969. As a teenager, Love spent some time in a correctional facility and in foster care before gaining independence and supporting herself as an erotic dancer while studying English and philosophy at Portland State University. In 1981, Love traveled to Europe, and then enrolled at the San Francisco Art Institute where she began studying film with George Kuchar before landing roles in Alex Cox's films Sid and Nancy and Straight to Hell.

Discuss this Courtney Love biography with the community: