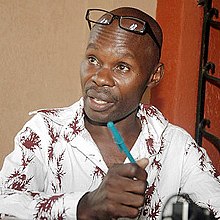 Who was David Kato?

David Kato Kisule was a Ugandan teacher and LGBT rights activist, considered a father of Uganda's gay rights movement and described as "Uganda’s first openly gay man". He served as advocacy officer for Sexual Minorities Uganda. Kato was murdered in 2011, shortly after winning a lawsuit against a magazine which had published his name and photograph identifying him as gay and calling for him to be executed.

Discuss this David Kato biography with the community: