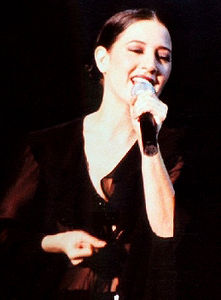 Who is Donna De Lory?

Donna De Lory is an American singer, dancer and songwriter. Part of a musical family, De Lory has been performing since a young age. Her voice can be heard on albums by Carly Simon, Ray Parker, Jr., Kim Carnes, Santana, Martika, Laura Branigan, Belinda Carlisle, Selena, Bette Midler, Barry Manilow, Mylène Farmer, Alisha and Madonna. De Lory accompanied Madonna as backing vocalist and dancer on every concert from the Who's That Girl Tour in 1987, up to the Confessions Tour in 2006. Her performance with Madonna at the Live Earth 2007 concert in London was their final professional collaboration to date.

Discuss this Donna De Lory biography with the community: