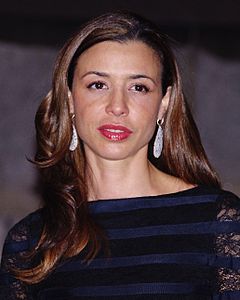 Who is Drena De Niro?

Drena De Niro is an American actress and film producer.

De Niro was born in New York City, New York. She is the daughter of actress Diahnne Abbott, and adopted daughter of Robert De Niro, whose last name she took upon her mother's marriage to him in 1976. She was named after river Drina in Serbia and Bosnia.

De Niro enjoyed a bohemian upbringing that saw her divide her time between New York City, Los Angeles, and Italy. This transient lifestyle is said to have been a driving factor in her embrace of the arts. Post schooling, she began her career in the entertainment industry working as a model. Further driven by her interest in fashion and music she became a DJ and Fashion Consultant. This led her to work as a musical supervisor for Giorgio Armani, serving as the creative force behind the coordination of musical backdrops for high fashion's most exclusive runway shows.

Her transition to the field of acting began after landing a role in Allison Anders's Grace of My Heart. Since her premiere role, De Niro has worked with and trained under Larry Moss, author of the acting guide, Intent to Live, and Susan Batson of The Black Nexxus Acting Studio. With the turn of the millennium, De Niro set her sights on writing and directing her first film, Girls and Dolls. This documentary examined a young stylist's obsession with her dolls, and won De Niro the Best Directorial Debut Award at the New York Independent Film/Video Festival in 2001.

Discuss this Drena De Niro biography with the community: