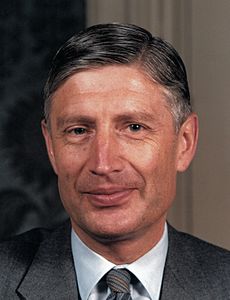 Who is Dries van Agt?

Andreas Antonius Maria "Dries" van Agt is a retired Dutch politician of the Christian Democratic Appeal. He served as Prime Minister of the Netherlands from December 19, 1977, until November 4, 1982.

He previously served as Minister of Justice from July 6, 1971, until September 8, 1977, in the Cabinets Biesheuvel I, II and Den Uyl. And Deputy Prime Minister from May 11, 1973, until September 8, 1977, in the Cabinet Den Uyl. He resigned as Minister of Justice and Deputy Prime Minister to become the first Christian Democratic Appeal Party leader and the first Parliamentary leader of the Christian Democratic Appeal in the House of Representatives which he served from May 26, 1977, until December 19, 1977, and a Member of the House of Representatives from June 8, 1977 until December 19, 1977. Van Agt became Prime Minister of the Netherlands, leading the Cabinets Van Agt I, II and III. He served as Minister of Foreign Affairs for his Third cabinet.

After his premiership, Van Agt remained in active politics and became the Queen's Commissioner of North Brabant serving from June 1, 1983, until April 22, 1987, when he resigned as Queen's Commissioner because of criticism on his performance and his cooperation with the States-Provincial. After leaving North Brabant, he became a diplomat for the European Communities, serving first as ambassador to Japan from April 1, 1987, until April 1, 1989, when he became the ambassador to the United States until April 1, 1995.

Discuss this Dries van Agt biography with the community: