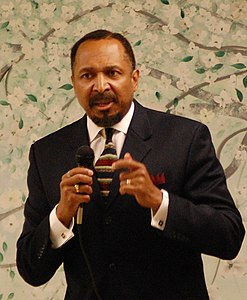 Who is E.W. Jackson?

Earl Walker Jackson, Sr. is an American politician, Christian minister and lawyer in Virginia. On May 18, 2013, he was nominated as the Republican Party candidate for Lieutenant Governor of Virginia in the 2013 election at the state party convention. Jackson was a Republican primary candidate for the United States Senate in Virginia in the 2012 election.

Jackson is the founder and current president of S.T.A.N.D., a conservative non-profit organization that describes itself as "a national organization dedicated to preserving life, the traditional family and our Judeo-Christian history and values as the Foundation of our Constitution and culture." He is head pastor at Exodus Faith Ministries, located in Chesapeake, Virginia. Jackson has appeared as a commentator on national news networks such as C-SPAN, Fox News and MSNBC.

Discuss this E.W. Jackson biography with the community: