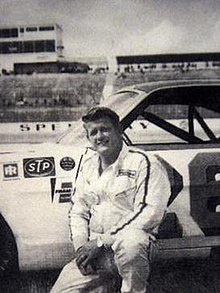 Who was Earl Brooks?

Earl Brooks was a NASCAR Winston Cup Series driver whose career spanned from 1962 to 1979.

His career came at a time where NASCAR was less organized than it is today and drivers independently owned their vehicles from the multi-car teams that emerged during the 1970s and 1980s. Brooks would befriend Wendell Scott who would become the first African-American to drive in NASCAR.

Discuss this Earl Brooks biography with the community: