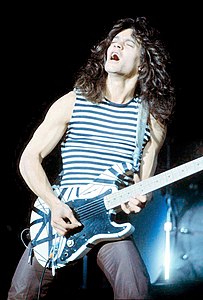 Who is Eddie Van Halen?

Edward Lodewijk "Eddie" Van Halen is a Dutch-born American musician, songwriter and producer. He is best known as the lead guitarist, keyboardist and co-founder of the hard rock band Van Halen. He is ranked as one of the world's greatest guitarists, and one of the most influential rock guitarists of the 20th century. In 2011, Rolling Stone magazine ranked Van Halen number 8 in the list of the 100 Greatest Guitarists. In 2012, Guitar World's poll named him as the greatest guitarist of all time.

Discuss this Eddie Van Halen biography with the community: