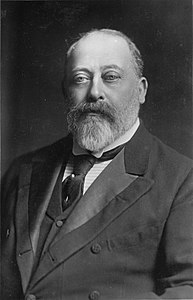 Who was Edward VII?

Edward VII was King of the United Kingdom and the British Dominions and Emperor of India from 22 January 1901 until his death.

The eldest son of Queen Victoria and Prince Albert of Saxe-Coburg and Gotha, Edward was related to royalty throughout Europe. Before his accession to the throne, he served as heir apparent and held the title of Prince of Wales for longer than any of his predecessors. During the long reign of his mother, he was largely excluded from political power and came to personify the fashionable, leisured elite. He travelled throughout Britain performing ceremonial public duties and represented Britain on visits abroad. His tours of North America in 1860 and the Indian subcontinent in 1875 were popular successes, but his reputation as a playboy prince soured his relationship with his mother.

As king, Edward played a role in the modernisation of the British Home Fleet and the reorganisation of the British Army after the Second Boer War. He re-instituted traditional ceremonies as public displays and broadened the range of people with whom royalty socialised. He fostered good relations between Britain and other European countries, especially France, for which he was popularly called "Peacemaker", but his relationship with his nephew, Kaiser Wilhelm II, was poor. Edward presciently suspected that Wilhelm would precipitate a war. The Edwardian era, which covered Edward's reign and was named after him, coincided with the start of a new century and heralded significant changes in technology and society, including steam turbine propulsion and the rise of socialism. He died in 1910 in the midst of a constitutional crisis that was resolved the following year by the Parliament Act 1911, which restricted the power of the unelected House of Lords.

Discuss this Edward VII biography with the community: