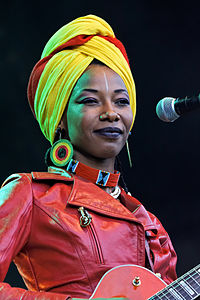 Who is Fatoumata Diawara?

Fatoumata Diawara is a Malian musician currently living in France. Born in Côte d'Ivoire to Malian parents, Diawara moved to France to pursue acting, appearing in Cheick Oumar Sissoko's 1999 feature film La Genèse, Dani Kouyaté's popular 2001 film Sia, le rêve du python, in the internationally renowned street theatre troupe Royal de Luxe, and played a leading role in the musical Kirikou et Karaba. She later took up the guitar and began composing her own material, writing songs that blend Wassalou traditions of Southern Mali with international influences. Noted for her "sensuous voice," she has performed and recorded with Oumou Sangaré, AfroCubism, Dee Dee Bridgewater, and the Orchestre Poly-Rythmo de Cotonou. The EP Kanou was released May 9, 2011, and her debut album Fatou from World Circuit Records was released in September 2011.

In September 2012, she featured in a campaign called "30 Songs / 30 Days" to support Half the Sky: Turning Oppression into Opportunity for Women Worldwide, a multi-platform media project inspired by Nicholas Kristof and Sheryl WuDunn’s book. September 2012 also saw her board the Africa Express Train with Damon Albarn, Baaba Maal, Amadou and Mariam, Nicolas Jaar, and the Noisettes, amongst many others. The show culminated in a 4.5k venue in Kings Cross where Fatoumata performed with Paul McCartney

Discuss this Fatoumata Diawara biography with the community: