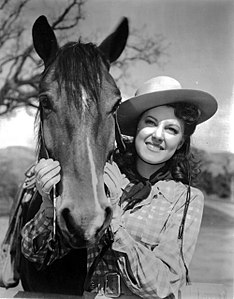 Who is Fay McKenzie?

Fay McKenzie is an American film actress, who began her career as a child in silent films and worked through much of the 1960s, albeit in smaller roles. She is best-known for her five leading lady roles opposite Gene Autry in 1941 and 1942.

The daughter of the actors Robert and Eva McKenzie, one of McKenzie's earliest roles was at the age of six in The Dramatic Life of Abraham Lincoln where she played Sarah Lincoln.

Discuss this Fay McKenzie biography with the community: