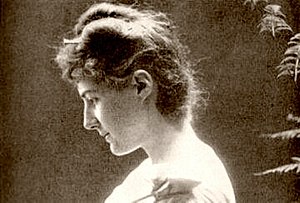 Who was Florence Balcombe?

Florence Balcombe was the wife of Bram Stoker, whom she married in Dublin in 1878. She was the daughter of Lieutenant-Colonel James Balcombe of 1 Marino Crescent, Clontarf, and wife Phillippa Anne Marshall, and was a celebrated beauty whose former suitor was Oscar Wilde. Bram Stoker had known Wilde from his student days, having proposed him for membership of the university’s Philosophical Society while he was president. Wilde was upset at Florence's decision, but Stoker later resumed the acquaintanceship and after Wilde's fall visited him on the Continent.

The Stokers moved to London, where Stoker became acting-manager and then business manager of Henry Irving's Lyceum Theatre, London, a post he held for 27 years. On 31 December 1879, Bram and Florence's only child was born, a son that they christened Irving Noel Thornley Stoker.

Balcombe is chiefly remembered as being responsible for the destruction of most of the prints of the 1922 horror film Nosferatu, which was based without attribution or permission on Stoker's novel Dracula. She was unaware of the existence of Friedrich Wilhelm Murnau's Nosferatu until she received an anonymous letter from Berlin. The document included the program of a lavish cinematic event held in 1922, complete with full orchestral accompaniment, that had taken place in the Marble Garden at Berlin Zoological Garden. The German film was described in the handbill as "freely adapted from Bram Stoker's Dracula."

Discuss this Florence Balcombe biography with the community: