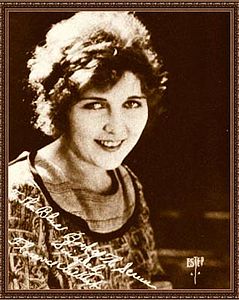 Who was Florence Gilbert?

Florence Gilbert was an American film actress of the silent 1920s. She supported actors William Fairbanks and Jack Hoxie.

Gilbert was born and mostly raised in Chicago her mother took her and brother Eddie to Los Angeles when she was 14 but reportedly looked a few years older, and got her into film after Monty Banks spotted her. In Hollywood she worked for Christy and Fox Studios making over 50 appearances from 1920.

Around 1926, when The Johnstown Flood was released she married entrepreneur Ashton Dearholt and bore him two children, Lee & Caryl Lee. She left show business permanently to tend home and family but she remained socially connected to the film community through her professional friendships and marriages.

Discuss this Florence Gilbert biography with the community: