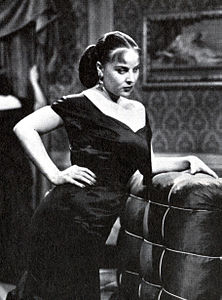 Who was Franca Marzi?

Born in Rome as Francesca Marsi, after working in the revue, Marzi made her film debut in her early twenties, in The Lovers by Giacomo Gentilomo. She was usually cast in roles of provocative women and femme fatales in films of sentimental or comic genre. The only exception was the Federico Fellini's drama Nights of Cabiria, in which she played the role of the prostitute Wanda, the best friend of Giulietta Masina, a role for which she was rewarded with the Silver Ribbon for Best Supporting Actress.

Discuss this Franca Marzi biography with the community: