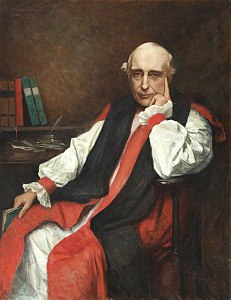 Who was Francis Chavasse?

Francis James Chavasse was an Anglican bishop. After serving in parishes in Preston, London and Oxford, he was principal of the evangelical theological college Wycliffe Hall, Oxford for 11 years from 1889. In 1900 he was appointed Bishop of Liverpool, the second incumbent of the post. He held it from 1900 to 1923, during which time he was instrumental in the commissioning and the early phases of construction of Liverpool Cathedral.

A lifelong member of the evangelical wing of the Church of England, Chavasse strove to unite all strands of Anglicanism and was widely accepted by members of the High Church tradition within his diocese.

After retiring from the bishopric in 1923, Chavasse returned to Oxford, where he was the guiding spirit of the establishment of a new academic institution admitting undergraduates of modest means. This opened in 1929, a year after his death, as St Peter's Hall, and was later given full collegiate status as St Peter's College.

Discuss this Francis Chavasse biography with the community: