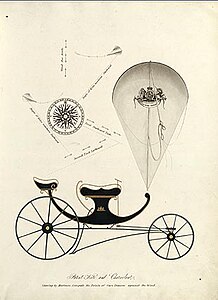 Who was George Pocock?

George Pocock was an English schoolteacher and inventor of the "Charvolant", a kite-drawn carriage.

Pocock was interested in kites from an early age, and experimented with pulling loads using kite power, gradually progressing from small stones to planks and large loads. He taught at a school in Prospect Place, Bristol and continued his experiments with his pupils. By 1820 he had determined that in combination they could support considerable weight and began experimenting with man-lifting kites. In 1824, he used a 30-foot kite with a chair rig to lift his daughter, Martha over 270 feet into the air. Later the same year and continuing to use his family as subjects, he lifted his son to the top of a cliff outside Bristol; his son briefly dismounted from the chair at the top of the 200-foot cliff and then concluded the test by releasing a clip on the kite line which allowed him to slide down the line in the chair and return to earth.

Discuss this George Pocock biography with the community: