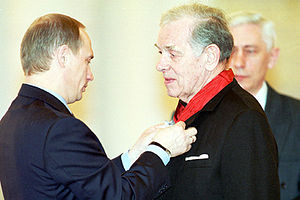 Georgiy Stepanovich Zhzhonov was a Soviet actor and writer.

Having matriculated from the Leningrad Circus Tekhnikum in 1932, he appeared in several movies, including the legendary Chapaev.

In 1939, Zhzhonov was repressed and spent 15 years in the Siberian GULAG labour camps. When released in 1955, he started his film career anew and rose to become a People's Artist of the USSR in 1980. In a curious twist of fate, Zhzhonov was frequently cast in the roles of policemen and KGB agents. This Gulag victim was even awarded a special KGB prize for the screen versions of three novels by Yulian Semyonov. Zhzhonov was also invited to play Stierlitz, but declined for personal reasons.

During the Perestroika, Zhzhonov started publishing his own fiction. In the 1990s, he received many awards, including the Nika Award for lifelong career. A monument to him was opened in Chelyabinsk in 2000.

Zhzhonov spent his 90th birthday acting in the Soviet Army Theatre. Later that day, he was invited to the Kremlin to be invested with the highest civilian decoration of Russia.

Discuss this Georgiy Zhzhonov biography with the community: