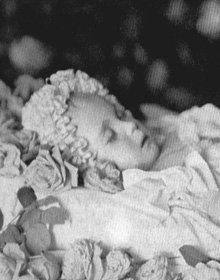 Who was Grand Duke Alexander Alexandrovich of Russia?

Grand Duke Alexander Alexandrovich of Russia was the infant son of Emperor Alexander III–the heir apparent, styled Tsesarevich, to the Russian throne as the eldest living son of Emperor Alexander II–and his consort, Marie Fyodorovna of Russia. He was Alexander's and Marie's second child, second son, and the younger brother of the future Emperor Nicholas II. He died of meningitis in 1870, one month before his first birthday. "The doctors maintain he did not suffer, but we suffered terribly to see and hear him," his mother wrote to her own mother, Queen Louise of Denmark. His parents had him posthumously photographed and sketched to remember him, therefore it is likely that the photograph to the right, of Grand Duke Alexander in his coffin surrounded by flowers, is the only existing photograph.

Discuss this Grand Duke Alexander Alexandrovich of Russia biography with the community: