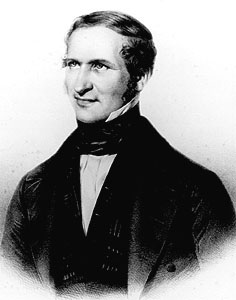 Who was Gustav Rose?

Rose was a graduate of the University of Berlin, where he was a student of mineralogist Christian Samuel Weiss. He also studied under Swedish physical chemist Jöns Jakob Berzelius in Stockholm. While studying with Berzelius, Rose met German chemist Eilhard Mitscherlich, with whom he maintained a lifelong friendship. Rose provided assistance to Mitscherlich's development of the law of isomorphism. In 1826 he became an associate professor of mineralogy in Berlin, and in 1856 was appointed director of the Royal Mineralogical Museum. From 1863 until his death he was president of the German Geological Society.

Gustav Rose made important contributions in the fields of petrology and crystallography, and is credited for pioneering usage of the reflective goniometer in Germany. He had a particular interest in the relationship between the crystalline form and the physical properties of minerals, and is credited for developing a mineral system that was a combination of chemistry, isomorphy and morphology.

Discuss this Gustav Rose biography with the community: