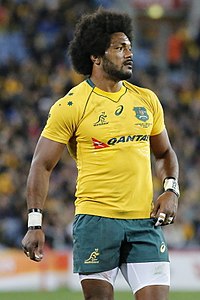 Who is Henry Speight?

Henry Speight is an Fijian rugby union player who has played for Hamilton Boys High School team, the Fijian national junior team, the Waikato provincial team, and currently plays for the Brumbies in Super Rugby. His playing position is wing.

Speight's first taste of pro-rugby came in his final year of school in New Zealand, when representing Hamilton Boys High School he was picked for Waikato making his debut against the Bay of Plenty in 2008. Speight went on to represent his province over four seasons. Not eligible for the New Zealand Schoolboys, Speight represented his native Fiji in the same year at the Junior World Cup in Belfast.

Speight made his Brumbies debut during the 2011 Super Rugby season against the Chiefs in Canberra. Considered by many to be the best wing playing in Australia it looks likely that Speight will be called up for test duty when he becomes eligible for national selection, on 11 September 2014.

He is the son of Fijian politician Samisoni Tikoinasau and the grandson of former Fiji President, Ratu Josefa Iloilo.

Discuss this Henry Speight biography with the community: