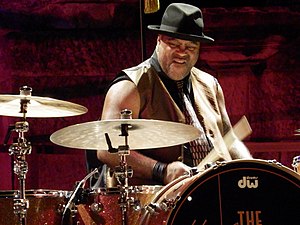 Who is Herman Matthews?

Herman Matthews is an American drummer and composer. Matthews works as a session and touring musician, most notably for Tower of Power, Kenny Loggins and toured with Tom Jones for more than 7 years. He began playing drums at the age of seven and has been the backbone of world-class pop, rock, jazz, soul, R&B and funk bands for nearly thirty years.

Discuss this Herman Matthews biography with the community: