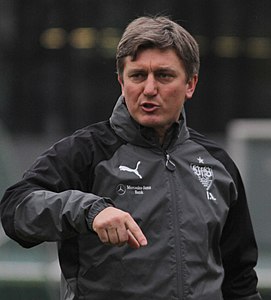 Coming from a sporting family, Aračić started his footballing career as a 9-year-old at Croatian team NK Ukrina Novo Selo, before moving aged 14 to the team his father Anto played for professionally at the time, NK Polet Bosanski Brod. He later played for his local team where he was spotted by scouts of Prva HNL side NK Rijeka. Aračić, a drafter by trade, left Croatia as a result of the War of Independence, signed for Chemnitzer FC in Germany before transferring to Tennis Borussia Berlin in the summer of 1998. During the 1998–99 season, after impressing Hertha BSC with his two goals against them in the DFB-Pokal, quickly signed for TeBe's fellow West Berlin rivals where he played for a year before moving to Arminia Bielefeld and seeing out the twilight of his playing career.

In 2004 Aračić took over as coach of FC Augsburg's youth team. On 1 January 2012, he became head coach of the under-19 team of VfB Stuttgart.

Discuss this Ilija Aračić biography with the community: