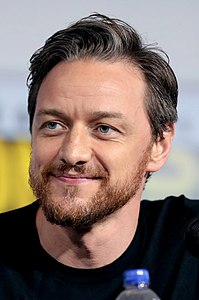 Who is James McAvoy?

James McAvoy is a Scottish actor. He made his acting debut as a teen in 1995's The Near Room and continued to make mostly television appearances until the late 2000s. His notable television work includes State of Play, Shameless, and Frank Herbert's Children of Dune. Besides screen acting, McAvoy has appeared on stage with Three Days of Rain in 2009, and in 2011 he did voice work for animated films including Gnomeo & Juliet and Arthur Christmas.

Starting in 2003, McAvoy began to build his film resume with Bollywood Queen. That film was followed with The Chronicles of Narnia: The Lion, the Witch and the Wardrobe, a commercial hit. His performance in Kevin Macdonald's The Last King of Scotland earned him not only critical praise, but several award nominations. 2007's critically acclaimed Atonement marked the breakthrough in McAvoy's career. It also earned him a Golden Globe Award nomination and his second BAFTA nomination. Another big point in the actor's career was starring in Wanted. Since then, he is notable for playing Charles Xavier in the 2011 superhero film X-Men: First Class, a role he will reprise in X-Men: Days of Future Past in 2014.

Discuss this James McAvoy biography with the community: