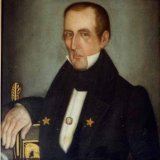 Who was James Semple?

JAMES SEMPLE IS A CLASSIC EXAMPLE OF A PRAIRIE ENTREPRENEUR.

Prairie Entrepreneurs followed opportunities where they led, carving winding paths through our state's history. James Semple is a classic example of this phenomenon.

James Semple was born on January 5, 1798, in Green County, Kentucky. He received some private instruction and attended the common schools. He enlisted in the Army in 1814 (War of 1812) at age 16, and became an ensign in the Kentucky militia two years later. Semple studied law in Louisville, Kentucky, and was shortly admitted to the bar. He came to Edwardsville, Illinois, in 1827 and continued to practice law.

In 1828 Semple was elected to the Illinois House of Representatives, serving as Speaker for four years. During the Black Hawk War (May 1832 to August 1832) he served variously as a private, adjutant, and Judge. In 1833 he was appointed attorney general of Illinois. After an unsuccessful effort as a Democrat to win election to the U.S. Senate in 1836, he moved to Alton at a place he called Semple Town. From 1837-1842 he was Charge d' Affaires to the nation of Columbia, appointed by President Martin Van Buren. In 1842 he was appointed to the Illinois Supreme Court and became Chief Justice.

Gen. Semple was also a land speculator and became involved in the real estate business. He and a relative named Bagsby, in 1837, seeking a suitable town along the projected Alton-Mt. Carmel Railroad, chose a site east of Edwardsville for a new town. He did this after conferring with several prominent local residents, including Joseph Suppiger and Dr. Koepfli.

Semple suggested the name Highland because it reflected both the geography of his native Scotland and that of Switzerland. Naturally, he bought tracts of land in Madison County close to where he thought the railroad would go through in the hope that he might hit a future town site and be able to sell at a big profit. Semple and Bagsby, with the cooperation of local men, laid out the town of Highland, sometimes known as Little Helvetia (Little Switzerland). A large steam gristmill was built by Suppiger. A sawmill and a store quickly followed. Jacob Eggen's pottery mill was started in 1835. Town lots were sold on Sept. 16, 1837, but the water was high on Silver Creek and Shoal Creek and, there being no roads or bridges, few could come from those areas. Less than 100 men attended the sale but few lots were sold because they were there mostly for curiosity's sake, having very little money.

The quaint town of Elsah (Jersey County), situated on the bluffs north of Alton, was originally platted by Gen. James Semple in 1853 and named for the Scottish town of Ailsah, his ancestral home. The spelling was changed when a post office was established. At Elsah, he offered lots to settlers who would build with stone, ensuring durability. Semple was also instrumental in founding the town of Tamaroa.

Yet Semple's most intriguing brainstorm was an idea he had to build a steam locomotive that could cross the prairie without traveling on railroad tracks. Illinois' first passenger railroad, the Northern Cross, was completed in 1840, and it stretched from Meredosia to Jacksonville. Two years later it reached Springfield. The railroad's name came from the fact that it was part of a vast internal improvements scheme by the state legislature in the northern part of the state. There was also to be a Southern Cross in the lower part of the state, but the railroad, canal, and plank road scheme, coupled with the Panic of 1837, bankrupted the state by 1841.

The Northern Cross had strap iron fastened to wood rails. Unfortunately, they had a tendency to curl up and stab the cars - and sometimes the passengers. Called "iron horses" by the Indians, the railroad's two engines (Rogers and Illinois) had to stop often for more wood and water. The two engines soon broke down for lack of spare parts. After that, what little traffic remained was pulled by mules. The state's first railroad project ended in failure; its crude rail lay deserted and rusting, its steam engines abandoned along the right of way.

Semple came up with a better idea. What about a prairie schooner that could navigate without the expensive construction of a roadbed with ballast and rails. Semple's train would also be cost effective since it didn't need to purchase right of way for the tracks. Semple worked nearly six years devoting time and money to his scheme. He approached the project in a scientific manner, corresponding with railroad experts and carefully examining steam engines. He decided to replace the skinny wheels on his locomotive with broad wooden cylinders that would support the heavy weight of the engine, and it was less likely to get stuck in the mud. Semple made a drawing of the wheels and chassis for his locomotive and applied for a patent from the U.S. government.

Semple quickly realized that he lacked sufficient funds for building a locomotive so he decided to obtain his cab and boiler from one of the abandoned engines of the Northern Cross. In August of 1844, he hitched a team of mules to the chassis of his "prairie car" and took it to the site of an abandoned engine, west of Springfield. After a few trials and adjustments, Semple discovered that his invention actually worked, but it was too large for practical purposes.

After a redesign and modifications, he came up with a new schematic that called for a model that was only nineteen feet long and eight feet wide. The wheels were about four feet in diameter. The new vehicle was rather uncomplicated, consisting only of a boiler, a water tank, a coal bin, a large smokestack, and drive pistons. The engineer stood on a small platform and steered with a large wheel, similar to that on a ship. In 1847 the state legislature granted Semple a charter for the Illinois Transportation Company. He printed detailed pamphlets and distributed them widely in an effort to secure financial backing. But in the end, there was only one man interested enough to risk his money. Commodore George DeKay.

By the summer of 1848, Semple was ready for a test run of his metal behemoth. On several occasions, Semple's engine easily pulled a car loaded with nearly a dozen people. In another test, near Lick Creek, the vehicle traversed prairie soil that was covered with several inches of water. But Semple ran into financial problems when DeKay, his benefactor, died. Semple's land schooner made its final run from Alton to Edwardsville, traveling along the existing plank road. Near Carlinville, on his way to Springfield, the smoke-belching vehicle fell into a hole and broke an axle. It was abandoned on the side of the road, and the rusting hulk became derisively known as Semple's Folly.

Semple died at Elsah on December 20, 1866, and was interred in Bellefontaine Cemetery in north St. Louis. Semple is best known for helping to establish the town of Elsah. Today it is a quiet place that attracts tourists because of its quaint name, antique shops, and bed and breakfast offerings. But if you find the right old-timer in that town, he'll tell you the story of a man who once tried to conquer the Illinois prairie with a contraption that puffed black smoke and traveled across the land on wooden rollers.

Discuss this James Semple biography with the community: