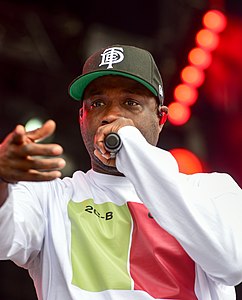 Who is Jay Rock?

Johnny Reed McKinzie, Jr, better known by his stage name Jay Rock, is an American rapper from Watts, Los Angeles, California. Jay Rock grew up in Watts, known for its low income, gang, and drug infested streets. Rock ultimately chose to take rapping over street life after Anthony Tiffith, CEO of independent record label Top Dawg Entertainment, found Rock in 2005 and signed him to his label after hearing a verse of his. In 2007, Rock, alongside Top Dawg, secured a recording contract with Warner Bros. and later Asylum Records, but after both mergers fell through, the label linked up with Strange Music, after Tech N9ne, Missouri-based rapper and founder of the label, met with them and offered Rock a record deal.

Since 2006, Rock has released several mixtapes and is perhaps best known for his 2008 commercial debut single "All My Life", which features Lil Wayne and will.i.am. Rock is also known for being a member of hip hop supergroup Black Hippy, alongside his label-mates and fellow West Coast rappers Kendrick Lamar, Schoolboy Q and Ab-Soul.

Discuss this Jay Rock biography with the community: