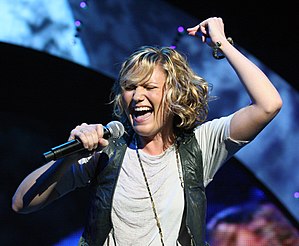 Who is Jennifer Nettles?

Jennifer Odessa Nettles is an American country music artist. She is known primarily for her role as lead vocalist of the duo Sugarland alongside Kristian Bush. Before Sugarland's inception, she also fronted Atlanta-based bands called Soul Miner's Daughter and Jennifer Nettles Band. She also charted as a duet partner on the country version of rock band Bon Jovi's 2006 single "Who Says You Can't Go Home", a Number One hit on the Billboard country charts.

Discuss this Jennifer Nettles biography with the community: