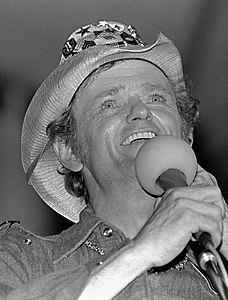 Who was Jerry Reed?

Jerry Reed Hubbard, known professionally as Jerry Reed, was an American country music singer, guitarist, and songwriter, as well as an actor who appeared in more than a dozen films. His signature songs included "Guitar Man," "U.S. Male", "A Thing Called Love," "Alabama Wild Man," "Amos Moses", "When You're Hot, You're Hot", "Ko-Ko Joe", "Lord, Mr. Ford", "East Bound and Down", "The Bird," and "She Got the Goldmine".

Discuss this Jerry Reed biography with the community: