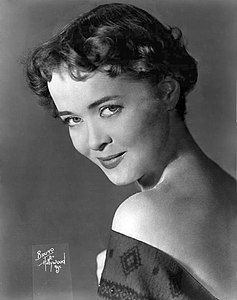 Who was Joan McCracken?

Joan McCracken was an American dancer, actress, and comedian who became famous for her role as Sylvie in the original 1943 production of Oklahoma! She also was noted for her performances in the Broadway shows Bloomer Girl, Billion Dollar Baby and Dance Me a Song, and the films Hollywood Canteen and Good News.

In her Oklahoma! role, McCracken became an instant sensation for a carefully choreographed pratfall during the "Many a New Day" dance number. She was considered an innovator in combining dance with comedy, and branched into dramatic roles on Broadway and early television. But her career was ultimately cut short, ending several years before her death at age 43, as she suffered complications from diabetes.

McCracken was generous in promoting the careers of other dancers, including Shirley MacLaine, and was a strong influence on her second husband, Bob Fosse, encouraging him to become a choreographer. She was noted for unconventional behavior and was one of the real-life person counterparts of Holly Golightly in Truman Capote's novella Breakfast at Tiffany's.

Discuss this Joan McCracken biography with the community: