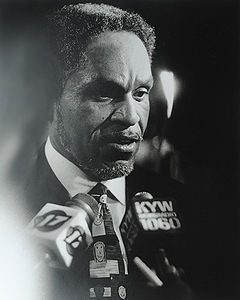 Who is John F. Street?

John Franklin Street is an American politician and lawyer who served as the 97th Mayor of the City of Philadelphia. He was first elected to a term beginning on January 3, 2000, and was re-elected to a second term beginning in 2004. He is a Democrat and became mayor after having served 19 years in the Philadelphia City Council, including seven years as its president, before resigning as required under the Philadelphia City Charter in order to run for mayor. He followed Ed Rendell as mayor, assuming the post on January 3, 2000. Street was Philadelphia's second black mayor.

Notably, in an unusual circumstance, the City Council President at the time, Anna Verna, was briefly in the position of running the city before Mayor Street was sworn in, as Rendell resigned the post in December 1999 to become the head of the DNC.

Discuss this John F. Street biography with the community: