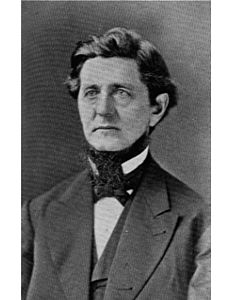 Who was John H. Addams?

John Huy Addams was a politician and businessman from the U.S. state of Illinois. Addams was born in Pennsylvania in 1822, where he married Sarah Weber. In 1844 the couple moved to Cedarville, Illinois, and he purchased the Cedar Creek Mill. Addams quickly became a successful businessman working as a director for two railroad companies and a bank president. He constructed a prominent Federal style home in 1854 which still stands today. In 1860 he and his wife Sarah had the eighth of their nine children, social activist Jane Addams.

Addams became active in state politics and eventually served as an eight-term Illinois State Senator from 1854 to 1870. In 1863 his wife, Sarah, died and he was remarried in 1867 to Anna H. Haldeman, herself a widow. He was a key influence on his famous daughter and part of the reason she focused so much attention on social causes. John H. Addams died in Green Bay, Wisconsin while on a family vacation in 1881.

Discuss this John H. Addams biography with the community: