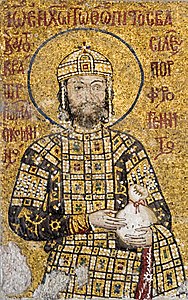 Who was John II Komnenos?

John II Komnenos was Byzantine Emperor from 1118 to 1143. Also known as Kaloïōannēs, he was the eldest son of Emperor Alexios I Komnenos and Irene Doukaina and the second emperor to rule during the Komnenian restoration of the Byzantine Empire. John was a pious and dedicated monarch who was determined to undo the damage his empire had suffered following the battle of Manzikert, half a century earlier.

John has been assessed as the greatest of the Komnenian emperors. In the course of his twenty-five year reign, John made alliances with the Holy Roman Empire in the west, decisively defeated the Pechenegs, Hungarians and Serbs in the Balkans, and personally led numerous campaigns against the Turks in Asia Minor. John's campaigns fundamentally changed the balance of power in the east, forcing the Turks onto the defensive and restoring to the Byzantines many towns, fortresses and cities right across the peninsula. In the southeast, John extended Byzantine control from the Maeander in the west all the way to Cilicia and Tarsus in the east.

Discuss this John II Komnenos biography with the community: