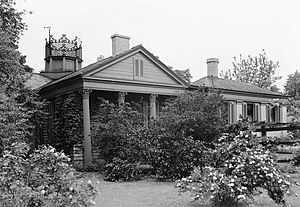 Who was John McMurtry?

John McMurtry was a 19th-century American builder and architect who worked in Lexington, Kentucky designing a number of notable buildings, several of which are listed on the National Register of Historic Places.

According to Clay Lancaster, McMurtry is the "man whose work is most representative of the nineteenth century architecture of central Kentucky", and among his works are some "meriting careful consideration".

Discuss this John McMurtry biography with the community: