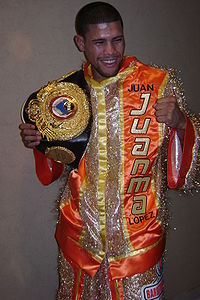 Who is Juan Manuel López?

Juan Manuel "Juanma" López is a Puerto Rican professional boxer. As an amateur, Lopez represented Puerto Rico at numerous international tournaments including the 2002 Central American and Caribbean Games, 2003 Pan American Games and the 2004 Summer Olympics. López's professional career began in 2005. As a professional he won his first nine fights by knockout before winning his first decision. On September 30, 2006 he defeated Jose Alonso to win the WBO Latino super bantamweight Championship, a regional championship sanctioned by the World Boxing Organization. On June 7, 2008, Lopez defeated Daniel Ponce de León by technical knockout to win the WBO super bantamweight championship. He held the title until January 23, 2009, vacating it after defeating Steven Luevano for the organization's featherweight championship.

Discuss this Juan Manuel López biography with the community: