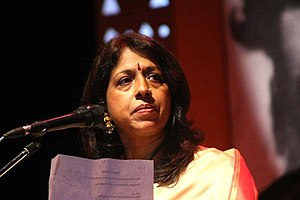 Who is Kavita Krishnamurthy?

Kavita Subramaniam née Krishnamurthy is an Indian film playback singer. Trained in classical music, she has sung a wide range of classical-based songs. In her career, she has worked with a variety of music composers, including R. D. Burman and A. R. Rahman. She is also the recipient of four Filmfare Best Female Playback Singer Awards, including 3 consecutive awards in the period 1994–1996, and the Padmashri which she received in 2006. In March 2013, she launched her own app which is available for free download in the Apple App Store and the Google Play Store.

Discuss this Kavita Krishnamurthy biography with the community: